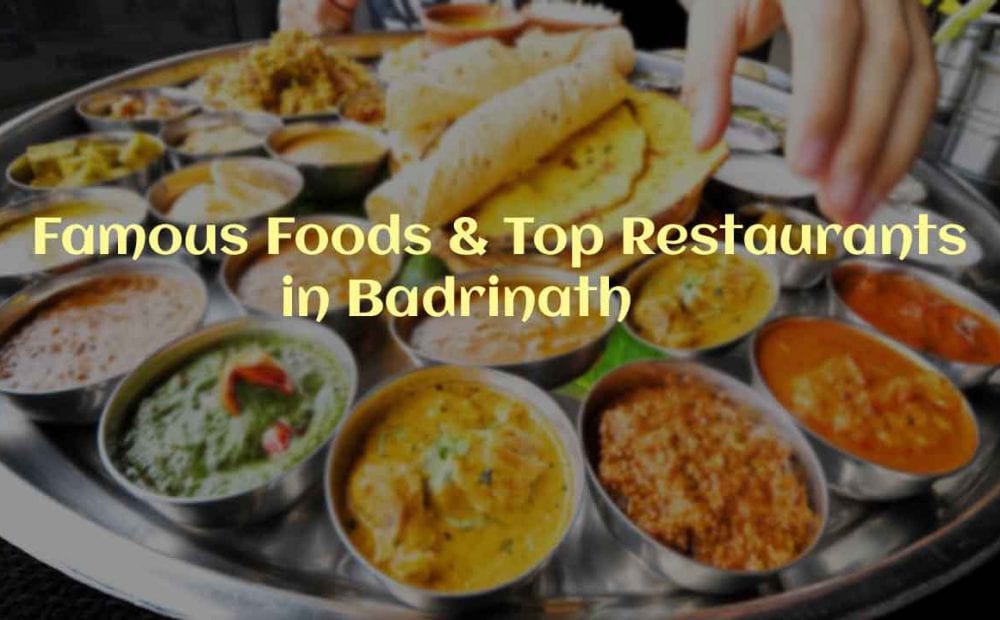 Apart from being the spiritual heaven it is, the cosy town of Badrinath in the laps of Garhwal Himalayas extends warm hospitality to the visitors.

As this holy abode of Lord Vishnu opens only for one half of a year, it compensates its isolation of the other six months by being gracious in terms of culture, landscapes and, of course, food. Though not exactly a foodies’ paradise, it does promise a glimpse of the region’s experiments with the staple ingredients and spices.

The pilgrims from all parts of India (and even abroad) throng the place and are not disappointed by the platters with a mix of cuisines from their respective regions and the mouth-watering Garhwali food.

The pilgrimage towns across India tend to get over-crowded during peak pilgrimage seasons and Badrinath is no different. In this scenario, the travellers are particularly concerned about the availability of good food and hygienic restaurants. And then, there is always a curiosity of trying the region’s specialities.

Like every other religious destination, Badrinath has its shares of do’s and don’ts when it comes to eating. Keeping your concerns and curiosities in mind, here is a useful guide which offers information about:

Badrinath is dotted with small eateries and dhabas as well as in-house restaurants of various hotels.

Don’t expect the luxury of 5-star food venues (except a few of the in-house facilities) you might be habitual of visiting in the cities. One reason for this is that these are seasonal businesses that don’t serve throughout the year. However, the locations of some of the most popular of these eateries work in their favour. Some of them are located near River Alaknanda while others enjoy the mesmerising views of the towering Himalayan peaks.

The town being one of the prime Hindu pilgrimage destinations (it is one of the four destinations of Char Dham and Chota Char Dham pilgrimage circuits) strictly prohibits the preparation and selling of eggs, meat and other non-vegetarian foods. In addition, alcohol is absent from the menus.

Apart from eating at the dhabas and restaurants, many people (especially those on budget) prefer to eat at langars (community offerings) served at various spots, ashrams and dharamshalas. Though the food served at these places is simple, it doesn’t lack taste. However, hygiene can be an issue especially if the food is prepared in open.

Delicious Garhwali Cuisines of the Region

Badrinath, as well as the towns and destinations leading to this holy place, boast of preparations that make extensive use of the hill-grown ingredients, the most prominent ones being lentils, pulses, fibre-rich coarse grains and aromatic herbs and spices. While travelling through the region, you should simply not miss tasting the cuisines like:

In addition, the region is also famous for its sweet preparations that are equally delectable in taste. Some of these include:

Food Choices from Other Regions

Apart from the Garhwali food, the town of Badrinath has venues that serve specialities of other regions. The two varieties that predominantly feature in the menus include:

Top Places to Eat At Badrinath

Chances are that you are planning to visit Badrinath for the very first time and thus gathering information about some of the best restaurants and eateries across the town. Here is a list you may choose from:

1. Saket Restaurant: A restaurant that finds mention in a number of Badrinath travel blogs is Saket which is located very close to the main Badrinath Temple. Promising amazing views of Alaknanda, the restaurant is also praised for its clean and spacious settings. Some of the must-try options include paranthas, poori bhaji and aloo matar.

2. Brahma Kamal: Another pure vegetarian restaurant overlooking Alaknanda, Brahma Kamal is recommended for its peaceful atmosphere. It is located close to Badrinath Temple and has nice-looking interiors. Apart from food, you may stop by the place for some fresh and tasty beverages.

4. Cafe in the Park: This in-house restaurant of Sarovar Portico boasts of exquisite interiors. It is a 100% vegetarian venue about 850 m. from the main temple. Being a multi-cuisine restaurant, it caters to the tastes and preferences of one and all. The property has another venue called the Fast Food Restaurant for light snacks and beverages.

5. Big Daddy: Another multi-cuisine in-house restaurant, it is owned by Narayan Palace Hotel and offers a relaxing environment with free Wi-Fi. It is located just 750 m. from Badrinath Temple and enjoys terrific views of the mountains. The availability of tandoori food is a plus point.

Useful Tips for Eating in Badrinath

If you are not used to the region’s food, it is necessary that you follow some important guidelines. Here are some suggestions to eat responsibly while on a trip to Badrinath:

Spices are an integral part of the region’s cuisines. Choose to eat them in the quantities you feel comfortable with.

Badrinath town being on the road head can be reached easily by road from Rishikesh which takes about 9-10 hours. In case someone has a paucity of time and still wishes to visit Badrinath, there is a Badrinath Helicopter Service also available on per helicopter or per seat basis.

Is there a possibility of Non-Vegetarian Food at Badrinath?

No! And it is advisable that one should refrain from non-vegetarian food on this holy trip. However, there are venues like Auli-D Food Plaza at the destinations like Auli offering non-vegetarian menus.

What should I prefer to eat in breakfast at Badrinath?

Aloo Poori and Poori Bhaji are two good options readily available at most restaurants. You may also try light south Indian dishes such as Dosa and Idly. Simmering hot cup of tea and coffee can also be savoured.