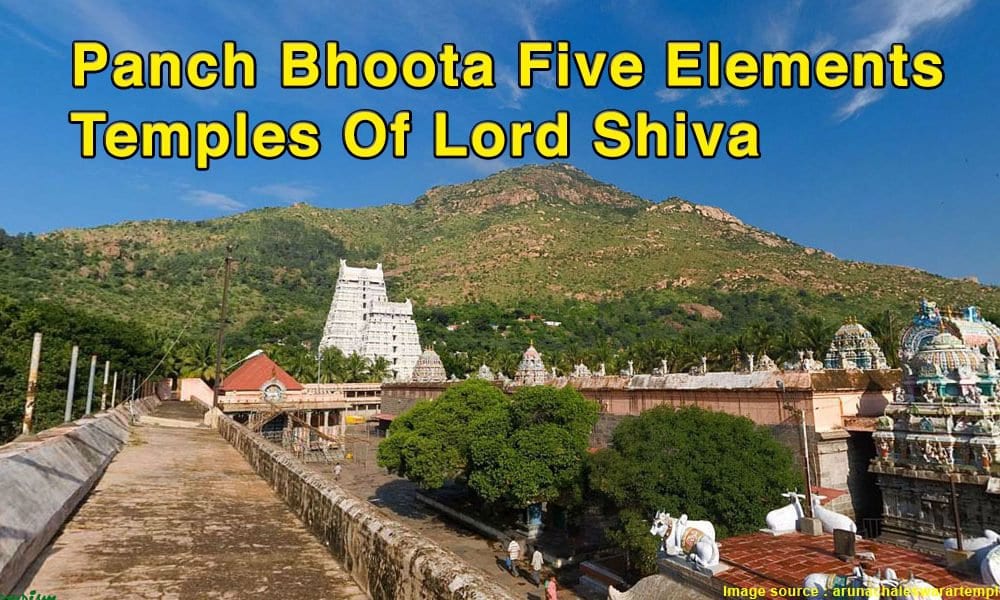 India is a land of divine spirituality and uniqueness. The mystical land of mythology, religion, and legends attracts devotees from around the world in pursuit of enlightenment and salvation. Unravelling yet another mystical side of India’s spirituality is Pancha Bhoota Five Elements Temples. Pancha Bhoota Five Elements Temples refers to sacred places where Lord Shiva is worshipped as the five elements of Mother Nature. Pancha means five, Bhoota indicates elements and stalam mean place. It is believed that a human body is composed of these five elements.

The Hindu God of Power, Lord Shiva, is worshipped as the five elements of nature, forming the famous five Pancha Bootha Stalams in India. Located in South India, where Shiva is worshipped as Agni or fire at Arunachaleswarar Temple at Tiruvannamalai; Neer or water at Jambukeswara Temple in Thiruvanaikaval; Bhumi or earth at Ekambareswarar Temple in Kanchipuram; Vaayu or wind at Srikalahasti; and Akasam or the sky at Chidambaram. Each temple narrates intriguing stories of mythology and how Lord Shiva is manifested in each of these sacred shrines. Come; discover a unique India. Book Pancha Bhoota Stalam tours today with Waytoindia.com and visit these Pancha Bhoota Five Elements Temples in India! 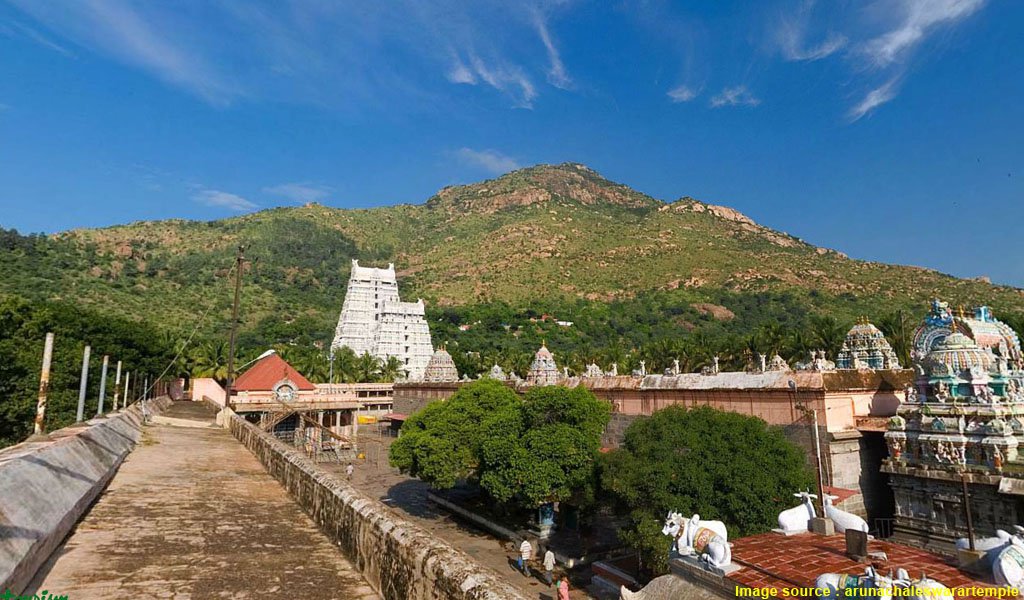 The shrine is situated at the foothills of the Annamalai Hill in Tiruvannamalai, Tamil Nadu. Shiva or Arunachaleswarar is represented here as Agni Lingam, presiding with his consort, Unnamulaiyamman, or Goddess Parvati.

According to legends, one day, Parvati playfully closed the eyes of Lord Shiva and the entire earth was darkened for years. Parvati, with other worshippers, performed penance and Lord Shiva appeared as a flame of fire atop the Annamalai Hill to eliminate darkness.

Shiva also merged his half with Goddess Parvati and is worshipped herein the form of Ardhanarishvara. The hill is considered very sacred and is believed to be a Lingam – representation of Shiva.

Spread across 10 hectares, it is one of the largest temples in India and among the best Shiva temples in Tamil Nadu.

How to reach: Chennai (182 km.) is the nearest airport and can be reached via a cab.Another airport which is near is Trichy Airport. There are also regular trains connecting Madurai, Tirupati, and Chennai. Tiruvannamalai is 185 km. from Chennai and 100 km. from Kanchipuram via road, and is well connected via buses and taxis.

Best time to visit: Visit the temple during the full moon day in November to December to exhibit the wonders of Karthigai Deepam Festival, when a majestic beacon is lit atop the Annamalai Hill and is represented as Shiva’s lingam of fire. The festival witnesses around 3 million pilgrims every year.

This is one of the most ancient temples in India, and a popular Pancha Bhootha Five Elements Temple where Shiva is manifested in the form of Prithvi Lingam.

As per legends, Goddess Parvati was doing penance for Lord Shiva under a Mango tree here when Shiva tried to test her devotion several times and failed. Subsequently, Parvati built a Shiva Linga out of the sand and got united with Shiva.

The tree is believed to be 3,500 years old and every branch is said to yield four different types of mangoes. Here, Eka means one and Amra mean Mango, and hence, the temple gets its name Ekambara or Lord of Mango Tree.

How to reach: Chennai is the nearest airport, while it has its own railway station that is well connected to Chennai. It can also be reached via roadways and is at a distance of only 2 hours from Chennai, with regular buses available.

Embark on a sacred journey to the important temples of South India without India Temple Tour.

Here, Lord Shiva is worshipped as Neer or water. The holy shrine has an underground stream of water, the source of which is still unknown and is always filled with water.

Legend has it that once Goddess Parvati mocked Shiva’s sacrament to better the world.To condemn her act, Shiva directed her to do penance on the earth. Parvati took the form of Akilandeswari and conducted her penance in a Jambu forest. She made a Shiva Lingam out of water from River Kaveri and commenced her worship.

The lingam is worshipped as Appu Lingam. Shiva gave darshan to Parvati and taught her Shiva Gnana. As Akilandeswari was like a student and Jambukeswara (Shiva) was like a Guru in this temple, there is no marriage conducted here for Shiva and Parvati as done in other Shiva Temples.This is also a must visit temple among the Pancha Bhoota Five Elements Temples of Shiva.

How to reach: The temple is located in Tiruchirappalli and is well accessible via rail, road, and air. It has a Civil Airport that connects it to other major cities of India. Trichy is also an important railhead with regular trains connecting other important cities. There are also buses available from other cities of the country.

The temple is renowned for its Vayu Linga, and Lord Shiva is worshipped as Kalahasteeswara with Parvati as Gnana Prasunambika Devi.

Srikalahasti Temple gets its name from Sri (Spider), Kala (Snake) and Hasti (Elephant) who used to worship Shiva with immense dedication. Once a war happened between them, and all three died in this course. However, Lord Shiva gave them Moksha for their selfless devotion.

Srikalahasteeswara Swamy Temple is known as Rahu Kethu Kshetra, where it is believed that if people with Rahu Kethu Doshas and Sarpa Doshas or is unmarried or has no children or facing various problems can perform puja in this temple and to remove all Doshas and get what they desire. Thousands of pilgrims visit the temple and perform puja to fulfil their vows and get results.

How to reach: Tirupati is the nearest airport (29 km.). Srikalahasti is well connected to other major cities via regular trains and buses.

Best time to visit: An important Pancha Booth Five Elements Stalam of Lord Shiva, the best time to visit this temple is during the festival of Maha Shivratri in the months of February or March.

The deity in this Pancha Bhoota Five Elements temple is manifested as Akasam or Sky, and Lord Shiva presides in the form of Nataraj – Lord of Dance.

Shiva is seen here performing the Ananda Tandava or Dance of Delight. The sculptures here exhibit the postures of Bharat Natyam.

According to legends, Shiva performed the Ananda Tandava to defeat the sages who believed in the supremacy of magic and that God can be controlled by magical words or rituals. The sages surrendered and accepted Shiva as the supreme power who is beyond rituals and magic.

In this temple, Shiva is presiding in three forms – “form,” “semi-firm”, and the “formless.”

How to reach: The temple is located in Tiruchirappalli and is well accessible via rail, road, and air. It has a Civil Airport that connects it to other major cities of India. Trichy is also an important railhead with regular trains connecting other important cities. There are also buses available from other cities of the country.

Best time to visit: December to January for Marghazhi Thiruvaadhirai festival and June to July for Aani Thirumanjanam festival.

Discover the spiritual and mythical land of India with Pancha Bhootha Sthalam tour packages offered by WaytoIndia. We offer custom travel packages as well as conduct guided group tours to ensure the most exhilarating experience.