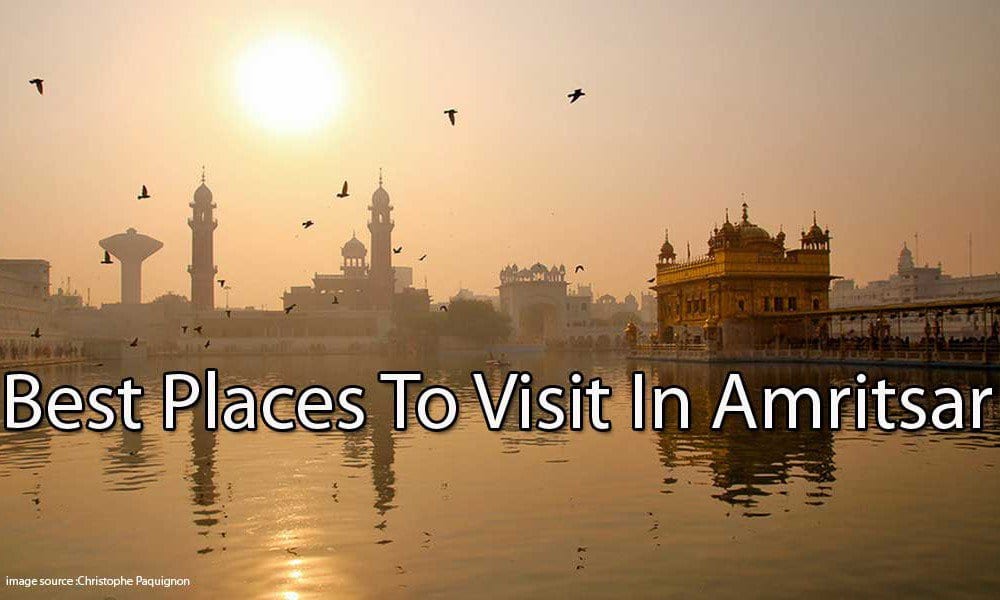 Amritsar is a splendid city, presenting a beautiful concoction of culture and tradition. The charming city of Punjab reveals an intriguing history and a wondrous future, standing proudly as an embodiment of heritage sites and religious centers. Amritsar is feted as the “Jewel of Punjab,” attracting tourists from around the world, in pursuit of peace, solace and Nirvana. Discussed here are the best places to visit in Amritsar.

Best Places To Visit In Amritsar 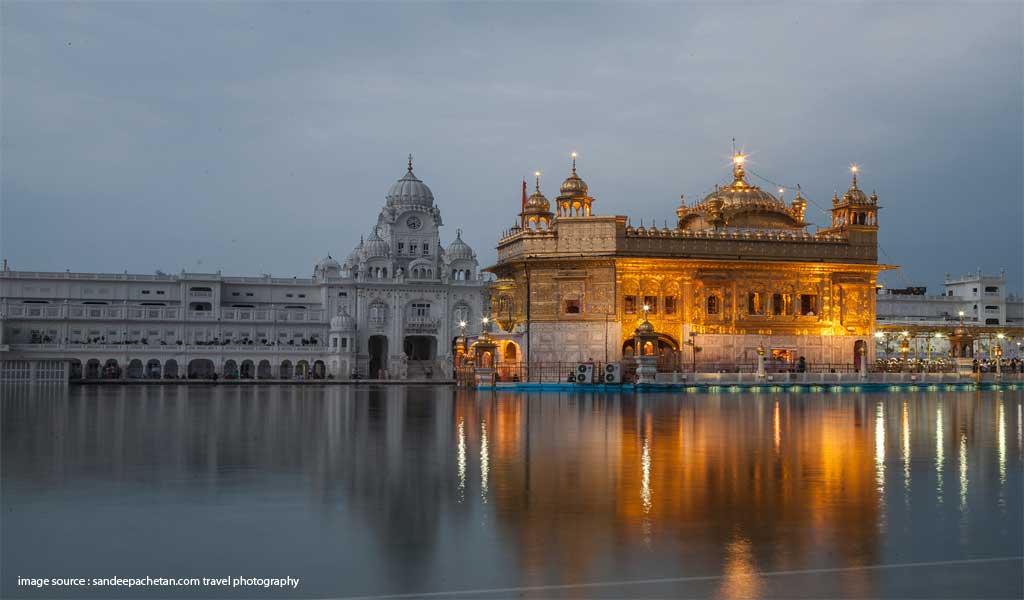 The magnificent Golden Temple is the most sacred pilgrim center for Sikhs, renowned for its spectacular golden dome. The epicenter of Sikhism, the temple is also known as Swarna Mandir, and is one of the most visited tourist attractions in Amritsar. The two-storied structure is built with white marble, standing proudly amid a beautiful pool, known as Amrit Sarovar. Everybody, irrespective of religion, caste and creed, can seek religious fulfillment and spiritual solace in the temple. Guru ka Langar, or the communal canteen, serves free food to about twenty thousand people every day. The Granth Sahib, or the Holy Book of the Sikhs, is kept within the Temple during day and in the Eternal Throne, or the Ákal Takht, in the night. Important places to visit in Golden Temple are Har ki Pauri, Dukh Bhanjan Ber, Akal Takht, Amrit Sarovar, Ber Baba Budha Ji, Ath Sath Tirath, Thara Sahib, Bunga Baba Deep Singh, and Gurudwara Ilachi Ber. The eternal experience of sitting by the Holy Tank and seeking solace, with melodious devotional music playing in the background, cannot be described in words.

How to Reach: Sri Guru Ram Das International Airport is located 13 km from the Golden Temple, only 18 to 20 minutes drive, connecting to major cities of the world. Rented car and taxis are available from the airport to the temple. Golden Temple authorities also provide free bus service to and from the airport. Amritsar railway station also connects to major cities of the country, and is around 15 minutes drive from the temple. Auto rickshaws are available from the railway station to the temple. There is also regular bus service from Delhi, Pathankot, Chandigarh, Jammu, Katra, and Dharamshala.

The famous memorial narrates the heart-breaking tale of 2000 Indians who were indiscriminately shot and killed by the British on April 13, 1919, under the command of General Michael O’ Dyer. Jallianwala Bagh Tragedy is considered a major incident of India’s struggle to freedom. The story of this massacre is narrated at the site, in Martyr’s Gallery, where a segment of the wall with bullet marks is still preserved. There is also a memorial well, where some people jumped to escape the appalling massacre. It was after this dreadful incident in the history of India that the noble laureate, Rabindranath Tagore, returned Knighthood to the British Government. This is one of the most important places to visit in Amritsar.

Timings: 6 am to 9pm in summer and 7 am to 8 pm in winter, from Monday to Sunday

Wagah border road crosses between Indian and Pakistan, connecting Amritsar (India) and Lahore (Pakistan). The famous international border is situated 28 km from the city, and is one of the best places to visit in Amritsar. What makes it a marvelous sight is the Change of Guard and Beating Retreat ceremony, which attracts thousands of spectators from around the country to come and cheer for India. The soldiers from India and Pakistan demonstrate immense spirit and enthusiasm as the fervor of patriotism soars high amid roaring applause of the spectators. As the sun goes down, both the countries bring down their respective national flags as a symbol of peace and harmony. The astounding ceremonial display, complemented with patriotic songs and roaring cheers of the audience in the backdrop, is an experience to behold.

How to Reach: Wagah Border is 35 from the airport, from where one can take a taxi or hire a car for Rs 700 to 800. The railway station is 28.1 km and accessible via taxi or hired car. One can also reach Amritsar and then hire a car to reach Wagah Border.

Ram Bagh is a magnificent garden in Amritsar, which has in its heart the beautiful summer palace of Maharaja Ranjit Singh (1780-1839), hailed as the Lion of Punjab. The Palace exhibits architectural excellence with a maintenance-free, inbuilt cooling system that invokes keen interest of the visitors. The garden was built and named by the ruler as a tribute to the founder of the city, Guru Ram Das. On one end of the garden stands a breathtaking life-like statue of the Maharaja in a winsome posture, seated on his horse. The summer palace has now been transformed into a museum that houses portraits of rulers of Punjab, weapons that date back to Mughal era, and a beautiful replica of the “Kohinoor” diamond. Ram Bagh is one of the most popular places to visit in Amritsar in one day.

How to Reach: Ram Das International Airport is 11.8 km from Ram Bagh, and 1.8 km from Amritsar Junction. Auto rickshaws are available from the railway station, while taxis commute between the airport and Ram Bagh.

The famous Durgiana Temple in Amritsar is dedicated to Goddess Durga and exhibits beautiful architectural design that resembles the Golden Temple. The temple was built during the 16th century, and portrays exemplary carved paintings of Goddess Durga in different incarnations. Paintings and idols of other deities are also present in the interior of the temple. One of the best tourist places in Amritsar, the temple exudes a brilliant elegance and splendor that attract travelers from around the country.

How to Reach: The distance of Ram Das International Airport from Durgiana Temple is 13.1 km, only 20 minutes drive via taxi. The Amritsar Junction is 1.1 km from the temple and easily accessible via auto rickshaws.

Ram Tirath, situated 11 km from Amritsar on Chogawan Road, holds immense religious significance that dates back to the era of Ramayana. It is considered to be Rishi Valmiki’s hermitage once upon a time, and exhibits several temples and an ancient tank. There is a hut where Mata Sita gave birth to her sons Luv and Kush, Rishi Valmiki’s hut and an ancient well with stairs where Mata Sita used to bathe. Since time immemorial, a 4-day fair is held at Ram Tirath on full moon night, starting on November 16. If you wish to discover the tales from the period of Ramayana, this is one of the best places to visit in Amritsar, Punjab.

How to Reach: The airport is at a distance of 12 km from Ram Tirath and accessible via taxi and private car. Amritsar Junction is located 2 km from the place and can be reached via auto rickshaw.

The historical banyan tree, with its lush canopy and gigantic girth, stands in the Namdhari Shaheedi Samark against the backdrop of beautiful Ram Bagh. The place holds great significance in the history of India, where four Kookas were hanged from the banyan tree by the British in 1871 because of their violent reaction against beef hawking around the Golden Temple.

How to Reach: Ram Das International Airport is 11.8 km from the Historical Banyan Tree, and 1.8 km from Amritsar Junction. Auto rickshaws are available from the railway station, while taxis commute between the airport and the site.