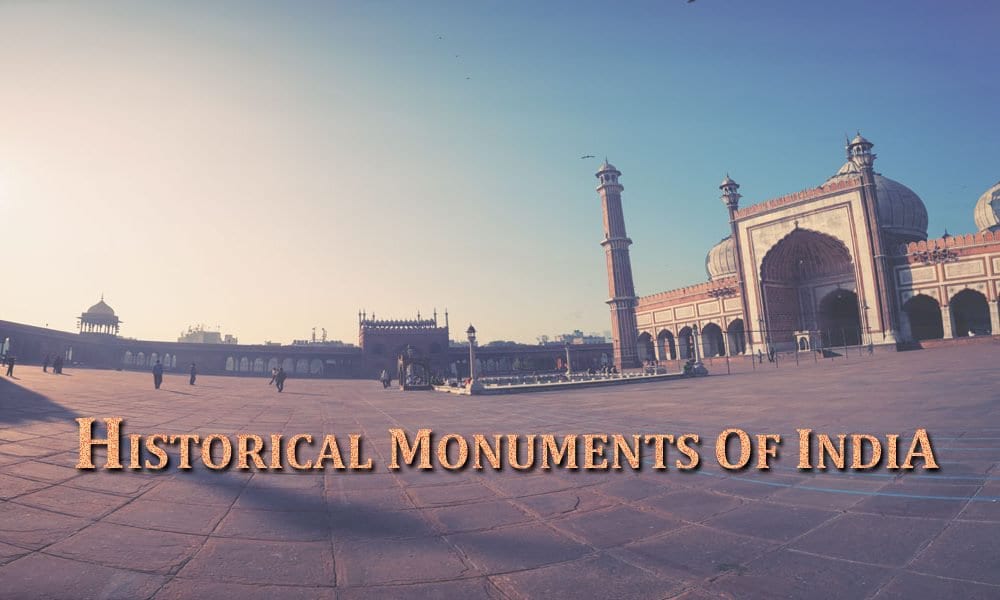 Imposing structures, monolithic monuments, and intricately carved forts are a part of historical monuments of India.These spectacular structures resonate with beauty and carry the remains of the bygone era.

Many great rulers have called India home and each of the great dynasties to rule over this vast land left an imprint here.

All the historical monuments of India depict those times. Intact in them is the culture and stories that flourished in those walls. 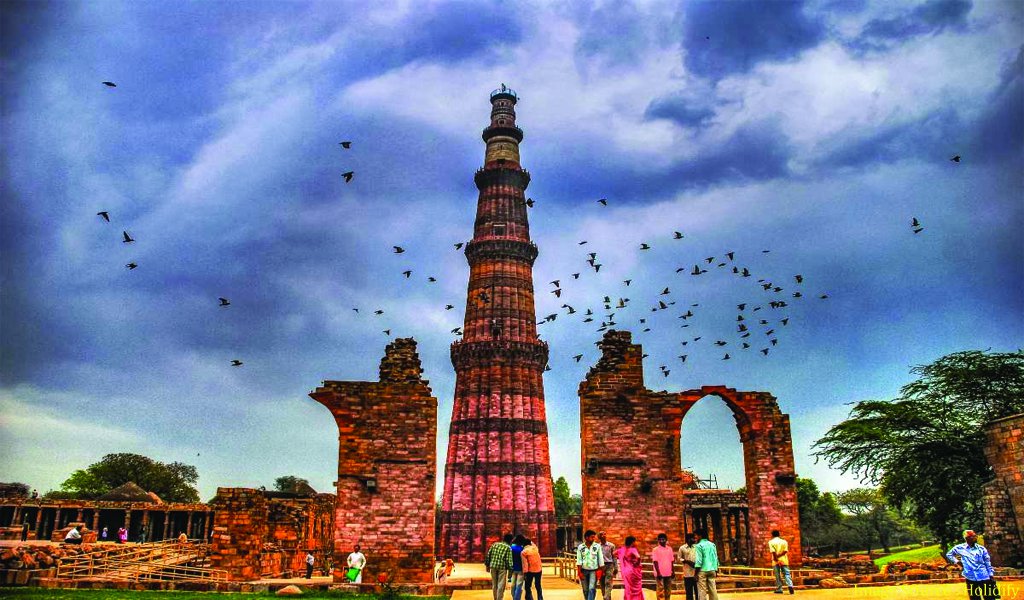 This second tallest minaret in India was built by the ruler of the Slave Dynasty, Qutab-ud-din Aibak.

Further stories were added by his successors, Iltutmish and Firoz Shah Tughlak.

This historical monument of India stands at an imposing height of 73 meters and the complex houses many structures such as Quwwatul-Islam Mosque, Alai Gate, the Alai Minar, the Iron pillar and the tombs of Iltutmish, Alauddin Khalji and Imam Zamin.

A jewel in the crown of Rajasthan is Amber Fort.

This magnificent fort was built under the reign of Raja Man Singh I and its architecture mainly comprises of red sandstone and marble.

The royal palace has four levels and each level has its own courtyard.

This World Heritage Site is considered to be one of the best monuments in India. It boasts of beautiful interiors that reflect the opulence the fort once held.

Dedicated to Sundareswarar and Meenakshi, Meenakshi Amman Temple is among the most important holy shrines in India.

The twelve towers of this Dravidian architecture are each richly sculptured. The detailing and hue of colours of the carvings are what makes this temple one of the best historical monuments of India.

This epitome of love has made its place in the world and is the most recognised historical monuments of India.

This marvellous beauty was commissioned in 1632 by Emperor Shah Jahan as the final resting place of his beloved Mumtaz Mahal. The grand mausoleum is built in ivory white marble and is an architectural marvel.

You may visit Agra by booking a 2 days trip to Delhi and Agra by sending us a query on the link https://www.waytoindia.com/delhi-agra-tour-package-2-days or calling us on 8527255991.

Ajanta and Ellora caves in Aurangabad are rock-cut caves that have always been a subject of admiration and bewilderment.

The architecture of these caves displays expert craftsmanship, way ahead of its time.

The 29 Buddhist caves built in the 2nd century B.C. are one of the best historical monuments of India and represent Theravada and Mahayana Buddhist traditions.

This fortified ancient city was once home to Emperor Akbar and the charming palaces built by him still stand today with dusted glory.

It was founded in 1569 and the Indo-Muslim style is prevalent in the architecture of this exquisite historical monument of India.

The palace built in red sandstone is still a beautiful sight with its pillars, ornamental arches, jharokhas, chatris and more such designs.

The architecture of the Sun Temple stands out as it displays a 100-foot high chariot with gigantic wheels and horses.

This architectural marvel is, in fact, among the best historical monuments of India as it withstood plunder and devastation but still amazes visitors with its detailed artwork and designs.

King Narasimhadeva I built this temple in a time span of 12 years and it is among the best historical monuments of India.

The 25 surviving temples of Khajuraho are among the finest in the world.

One of the most important among the historical monuments of India, Khajuraho is famous for its stunning sculptures that flank each temple.

The most famous among this is the Kandariya Mahadeva Temple, which has elaborate artwork and expressive description of love and feminine beauty.

This imposing fort of Jodhpur is a true example of the grandeur and power of the Rajputs. It is another historical monument of India that has withstood the test of time.

The fort has the most well-stocked museum in all of Rajasthan and gives a surreal experience of travelling back in history. This magnificent fort was built around 1460 by Rao Jodha.

Charminar is among those famous historical monuments of India that are an iconic landmark.

It was built by Sultan Muhammad Quli Qutb Shah in 1591 when he made Hyderabad, the capital city.

The structure is both a monument and a mosque. The tower is 56 meters in height and is one of the most recognized monuments in India.

The excellent architecture of Dilwara Jain Temples makes them one of the finest and most recognized Jain temples in India.

This one of the most magnificent historical monuments of India is considered by many to be architecturally superior to the Taj Mahal.

They were built by a minister Vimal Shah in 1031 AD; he was a nobleman in the court of Bhimdev I, the Chalukya king of Gujarat.

This famous structure of Goa contains the tomb and mortal remains of St. Francis Xavier.

The term Bom Jesus means Holy Jesus and this particular church is very revered by Christians. The Baroque architecture of the monument makes it all the more special.

This historical monument of India is the oldest churches in Goa and even in the country. The foundation of this church was laid on 24 November 1594

This monument is complex that was built by Asaf-ud-Daula as part of a relief project.

Devastating famine had rendered people penniless and the construction of this building started in order to generate work and revenue for the people.

The ordinary folks built the monument during the day while the elite broke it down during the night. This insured employment for people for over a decade.

It is said that there are 1024 ways to reach the terrace but only one to come down. Every year Muslims gather in this another of the best historical monuments of India to celebrate the religious festival of Muharram.

Another glorious piece of architecture in the south are these 11th and 12th century Temples.

The brilliant architecture, sculpture designing and painting done during the reign of Cholas is evident in these temples.

Humayun Tomb is a remarkable structure and among the best monuments in India.

Bega Begum, Humayun’s chief consort had built this iconic tomb as the last resting place of Emperor Humayun. It is one of the first historical monuments in India that is a garden tomb and boasts of an Indo-Persian architect.

This monument became an inspiration for other iconic garden tombs such as Taj Mahal. The monument also houses the tombs of many other famous Mughals.

Champaner is located in the foothills of the Pavagadh hill in Gujarat.

The series of forts originate on the hilltop and end on the plains.

The temples belong to Hindu and Jaina sects and most of the structures are a blend of Hindu-Moslem architecture as Sultan Mahmud Begarah took the possession of the fort in 1484.

This historical monument of India was commissioned by Emperor Ashoka and remains one of the most important Buddhist monuments in the country.

This is one of the best monuments in India displaying the unique Buddhist art and architecture and thus is an icon of Sanchi.

The hemispherical structure called stupa is surrounded by four gateways called Toranas. The Stupa contains the relics of Buddha, which is why it is a place of great spiritual importance.

Chhatrapati Shivaji Terminus, earlier called Victoria Terminus is an important historical monument of India and the lifeline of Mumbaikers.

The craftsmanship and sculptures here are a fine example of Victorian Gothic Revival architecture in India. The glorious architecture is a mix of Indian traditional and British architecture.

The terminal was built in 1878 and now functions as a major train station connecting all of Mumbai.

This great monument of India was an ancient learning site built in the 5th century AD. Holy men, including Buddha himself had visited this place.

Famous Chinese traveller Hieun Tsang had also stayed here in the 7th century AD and wrote about the superior education system of Nalanda.

This fort is among the most famous historical monuments of India.

Initially, this site was called Indraprastha, the place of the Pandavas. It later became the palace of Humayun and Afghan king Sher Shah Suri.

Though now only the ruins remain, some of the monuments like Qila –i-Kuhna Mosque, Sher Mandal, and Kunti Temple are still in good shape.

It is one of the most magnificent fortress complexes in India simply because of its architecture.

The fort had eventually fallen under the control of Bahmani Sultanate and Sultan Quli Qutb-ul-Mulk established his empire there.

Explore these best monuments in India and many other architectural gems. Get in touch with WaytoIndia for more information and to book the best travel package.