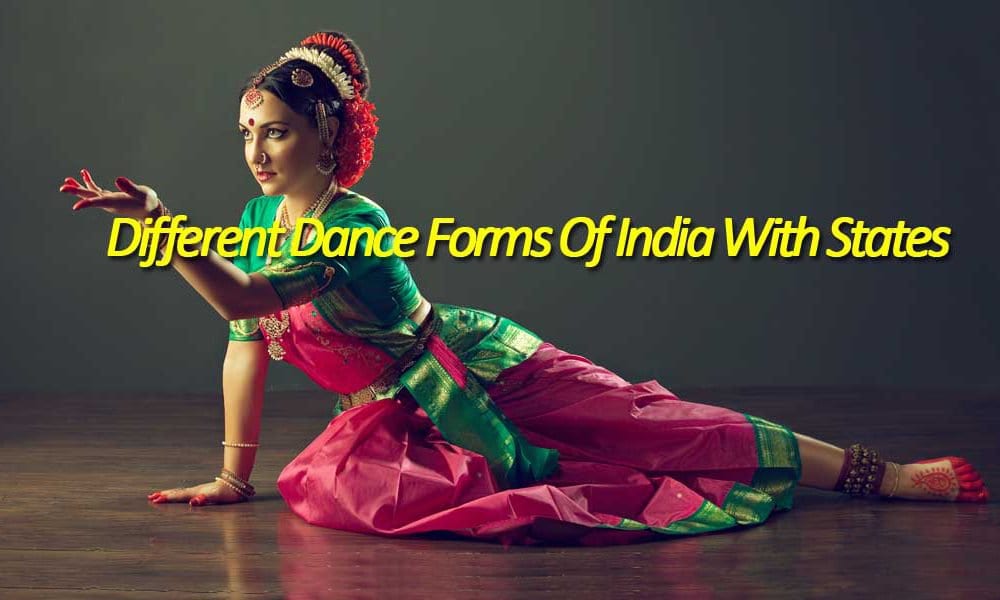 India witnesses a diverse and varied culture. Adorned by endless varieties of cultural patterns, the landscape of India is beautified with lovely traditions. Different states have different languages, eating habits, customs, religion, etc. Like all other aspects of life, the dances of different states in India are also distinct. The uniqueness of dances of India binds the entire country together. Going back to ancient times, this art form was considered as a way to celebrate, worshiping and as a gesture of thanksgiving to the deity. Dances of India reflect its cultural richness.In this blog, we explore the different dance forms of India with states.

About Kathak: The word Kathak is originated from the word Katha which means storytelling. Traditionally this dance was more religious in nature, typically narrating the stories of Radha and Krishna. The dancers dance to the rhythm of table or pakhawaj.

About Odissi: Performed by ‘Maharis’ or female temple servants, this dance form have a close association with the temples and temple sculptures. Odissi stands out from other forms of dances because of its Tribhangi posture, dealing with three body parts, i.e. head, bust, and torso.

About Manipuri: Manipuri dance is one of the famous dances of India. The main characteristics of this dance are colorful decoration and costumes, charming music, gentle and swaying petal-soft foot movements and delicacy of performance. This traditional dance is mainly inspired by the rich culture of Manipur. For all the religious and other socio-cultural ceremonies, this dance is a must.

About Sattriya: When you are on your Assam tour, make it a point to watch this traditional Indian dance. It is an art which represents dance-drama performances with a unique combination of hand gestures, footwork, expressions, and body movements. Most of the themes of dance relate to Ram and Sita or Krishna and Radha. The main characteristics of Sattriya dances are rich and varied melodies, lyrics and rhythm.

About Bharatnatyam: This Indian classical dance tops the list of famous dances of India. The centuries old dance teachers and temple dancers hand over this beautiful dance form to us. It is a delightful combination of four elements i.e. expression, music, beats, and dance. The accompanying music in Bharatnatyam is classical Carnatic. The costumes are similar to Indian sarees with vibrant colours and made of Kanchipuram silk and Banaras silk.

About Kathakali: Kathakali is another popular Indian dance form. Kathakali means story play; hence the stories of Ramayana and Mahabharata act as a source for a lot of performances. This form of dance is known for its heavy, intense makeup and costumes. The kind of character represents the facial makeup of dancers, like green color makeup is used for kings, heroes, and divinities; while black color is used for evil.

About Mohiniattam: The word Mohiniattam derives its meaning from the word Mohini, which means beautiful women and attam which means dance. Thus this form of dance represents a beautiful feminine grace. These dances are based on love and emotion themes. The costume is off-white colour saree with rich gold borders. The musical instruments used are mridanga, veena, flute, etc.

About Kuchipudi: This traditional dances of India, is a combination of speech, Abhinaya (mime) and pure dance. Kuchipudi performance is more like a dance drama where dancers play different roles based on the drama content. Carnatic music and vocalists accompany this dance of Indian culture.

About Bhangra: Bhangra is one of the most popular folk dances of Punjab. Men folks perform this, especially during Baisakhi. It is full of enthusiasm and energy. Men are dressed in lungis and colorful turbans. This form of dance uses a lot of feet movements on the beats of drums.

About Giddha: Another popular dance of Punjab is Giddha, which is performed by women folks. They perform this art during social occasions and especially during Teeyan festival as a gesture of welcoming monsoon. It displays female grace and elegance along with high energy levels. In this form of dance, one dancer sits in the center to play the drum, while others dance in a circle surrounding her.

About Sirmour Nati: Sirmour Nati is a popular folk dance in the North. Traditionally this dance was performed for 4 to 5 hours and wouldn’t stop till the performers and musicians are exhausted. It is similar to Kathak dance. Rhythm plays an important role in this dance. Musical instruments like drums, shehnai, and cymbals accompany the performances.

About Dumhal: Among many traditional folk dances of Indian states, one popular dance form is Dhumal. Men folk of the Rauf tribe perform this form of dance. A unique characteristic of this dance form is the banner inserted into the ground while performers dance surrounding the banner. The music is produced from drums and dancers themselves sing in chorus. The costumes are very vibrant and colourful with long robes and tall conical caps flecked with beads and shells.

About Saang: Saang is another traditional folk dance of Indian state and represents true culture of Haryana. It is performed by an even number of dancers. Saang means to impersonate i.e. to pretend to be another person. So you will find a lot of male dancers dressing up like females to perform their part. Saang reflects a lot of religious stories in their performances.

About Garba: Dances of Gujarat are definitely going to fascinate you when you are on your Gujarat tour. Garba is a popular dance performed during Navaratri festival. It is mainly dominated by women folks and performed in honour of Goddess Amba. Garba derived its meaning from a Sanskrit word ‘Garbha’ which means ‘womb’ and deep’’ which means a small earthenware lamp. So traditionally, women folks surrounding a clay lantern with a lamp inside performed this dance.

Note: Please preferably put a picture of traditional garba in traditional costume with women having earthern lamps in hand, something similar to below pics.

About Kalbelia: Kalbelia tribes perform Kalbelia dance. It is one of the most sensuous dances of Rajasthan. Both men and women participate in this dance; men play the musical instruments, while females perform the art. It is mainly performed on been (poongi), Dholak, Khanjari, etc. The black-coloured costumes of dancers resemble black snake and look striking with silver embroidery and red laces.

About Ghoomar: Like other dances of Rajasthan, Ghoomar is also very enthusiastic folk dance. It was originated and widely practiced by Bhil tribe. It derived its name from the word ‘ghoomna’ which symbolizes the twirl movements of dancers. Women wear colourful ghagra’s (skirts) and their face is covered with dupatta (veil).

About Raaslila: Raaslila has originated from the land of Krishna, Vrindavan. It is an integral part of Indian culture.  Raaslila is derived from the word Raas which means aesthetics and word lila which means an act or a play. This dance form depicts the divine love of Krishna and Radha. It is mainly performed during the Janmashtami festival.

About Chholiya Dance: Chholiya is a popular folk dance performed in Kumaun region of Uttarakhand. It is performed with a sword and often linked with marital traditions of the people in Kumani region. During Kshatriya’s era, it was usually performed when the marriage processions were held at the point of swords. But now chholiya dance is a common performance on many important occasions. It has religious significance and is believed to protect from evils.

About Bihu: Bihu dance is mainly performed during Bihu festival which is celebrated in mid-April. The dancers dance in circles or in parallel rows. The main theme for this dance form is love. Drums and pipes help in playing the melodious music. Dancers wear colourful and traditional Assamese clothes. So when you are on your Assam tour, make sure you explore this traditional and lively folk dance.

About Atta Karagam: Atta Karagam is a popular folk dance in South. Performers perform this dance by placing pots on the head and balancing them. Dancers perform in temples and during festive occasions. Atta Karagam symbolizes joy. It was traditionally performed by the people of villages to praise the Rain Goddess, Mari Amman and Gnagai Ammana, the River Goddess.

About Theyyam: Theyyam is widely worshiped and people of various districts in Kerala perform this dance form to seek blessings from Theyyam. It originated from Kaliyattam festival. This festival is celebrated as the sixth incarnation of Lord Vishnu, who saved the land of Kerala from advancing sea. Theyyam includes dance, mime and music. Dancers perform this dance with the headgear and other heavy ornaments.

Let WaytoIndia.com showcase the real wealth of India to you. Stay tuned!