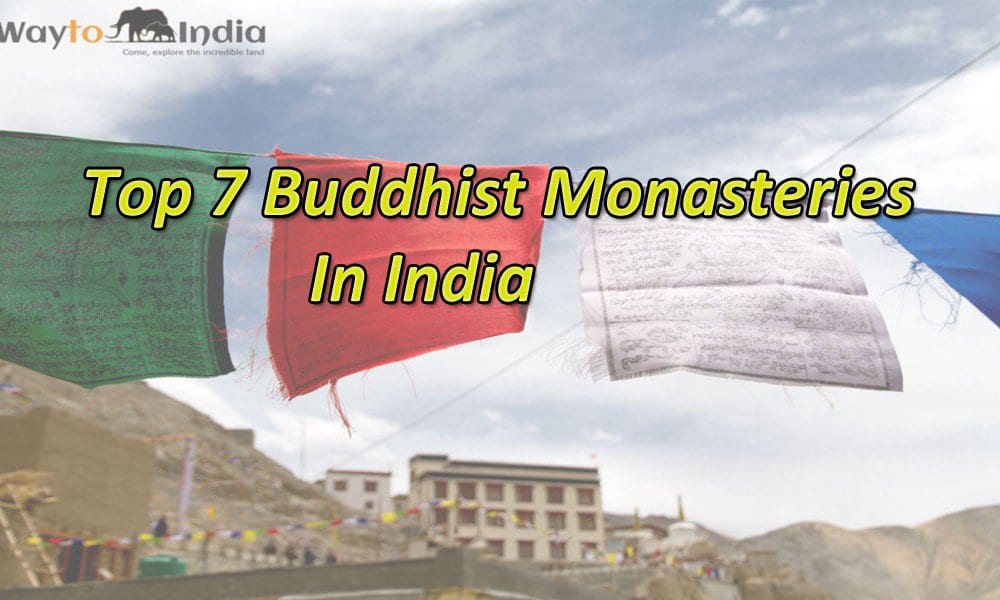 India is multi-cultural land where people follow several religions. While evaluating the country from outside, it might appear that Hinduism is the only dominant religion in the country. However, when you start travelling to specific interiors, especially the North East, you will notice that several other religions also flourish in those parts. Buddhism is one such religion which is followed by a lot of people in hilly regions, especially the Tibetan exiles who were given shelter in India. This led to the set-up of several monasteries in and around Jammu-Kashmir and Himachal Pradesh.Today, we take you to a tour of top 7 Buddhist Monasteries In India:

Located above the Tawang town near Bhutan border at a height of 3500 metres above the sea level, Tawang Monastery is the largest Tibetan Buddhist Monastery in the world and also popular by the name of Galden Namgey Lhatse. It is recommended to visit the monastery during early hours in order to catch sight of dancing monks. The monastery represents Mahayana Buddhism.

Of the 200 monasteries located in Sikkim, Rumtek Monastery located at the peak of Gangtok is the largest and hence the most popular. The Monastery attracts tourists for its ancient origin (since 9th century), magnificent and colourful landscapes, gushing waterfalls and untouched river. Given the conflict surrounding this monastery, tourists will notice that there is high security at this place. Apart from visiting the monastery, visitors should pay a visit to the Lingdum Gompa and Rumtek Gompa. One can also participate in the masked dance festival held just before the Tibetan New Year.

Thiksey Monastery, located in the Indus Valley, serves two-fold purpose for any visitor – one is to worship Lord Buddha and the other one is to enjoy the remarkable hill-covering location and fabulous look of this place. The place also has a museum which has preserved ancient relics and art during the Buddhist period. Maitreya Temple is most famous amongst tourists at this monastery on account if its 49 feet tall statue of Lord Buddha.

If you are in the South of India and fancy visiting a monastery, Nyingmapa near Coorg, is probably the only monastery to turn to. The Monastery is most famous for its Tibetan settlement in this region, the Golden Temple and the Namdroling Monastery. The innumerable gold statues of Buddha in the temple and the prayer hall and the countless domes provide exotic experience to the tourists.

Trekking at a monastery can be real fun. Phuktal Monastery, located at the mouth of a grand cave, has its origin dating back to the 16th The Monastery hosts several prayer rooms alongside a main temple, teaching facilities, a library, apartments and kitchen room. Sacred spring and the cave is the most prominent feature of this place.

Located 50 km. to the south-east of Ladakh, Hemis Monastery was re-established in 1652 and is famous for the spiritual re-treat and masked dance held at the Hemis festival. While in this region, you should not miss visiting the Hemis National Park. You will be awestruck with huge collection of ancient statues and age-old artifacts at the Hemis Gompa.

At the foothills of Himalayas, the Mindrolling Monastery in Dehradun is well-known to be a Buddhist institution and a learning centre. It belongs to the Nyingma School and was restored in 1976 in India. Buddha Temple and Rajaji National Park are popular destinations here. The 107 feet tall Great Stupa of Lord Buddha is highly recognised for its architectural magnificence.

To visit some of these monasteries in Ladakh, you can read about the travel itineraries and all relevant details on http://waytoindia.com/majestic-ladakh-tour . It would not be out of place to mention that Dharamshala and Mcleodganj are the seat of  Tibetan Government in exile where His Holiness Dalai Lama resides.To visit Dharamshala ,Mcleodganj & Dhalousie you can refer the link http://www.waytoindia.com/trip-to-dalhousie-from-delhi