“Benaras is older than history, older than tradition, older even than legend and looks twice as old as all of them put together”- Mark Twain

Top 10 Places To Visit In Varanasi

Varanasi is a land of charisma and mystique, religious, spiritual and cultural, set on the banks of the essential Hindu cleansing river, Ganges. Going by various names like Kashi, Banaras or Benaras, Varanasi is much like the typical Hindu God or Goddess transformed into a city. Suffused with swirls of incense smoke, and packed with the riff-raff of pilgrims, saffron-clothed Sadhus with red eyes, palmistry experts, fortune-tellers, astrologists, and most important of all, the sacred-thread bearing Brahmin Pandits, Varanasi is an exuberant city overflowing with colours, people, religion and all things that kindle the flame of life. 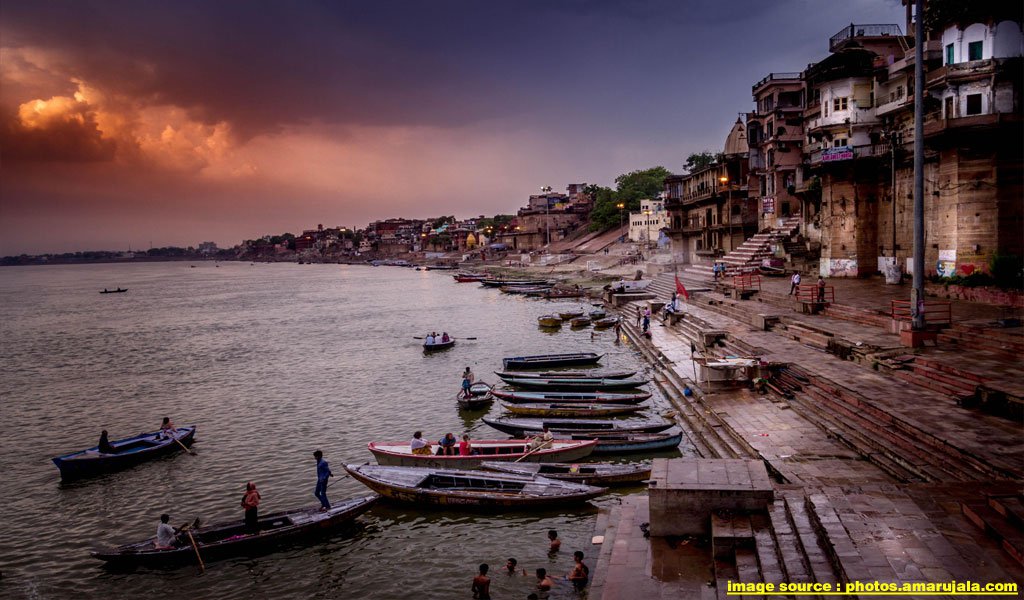 It is considered extremely fortunate if one dies here, as they’re already believed to be closer to God. Traditionally , Ganges is the bearer of corpses and ashes of the departed, making Banaras an ironical idyll, on both ends (life and death) of the spectrum. Some visit this Holy town to attain a state of Nirvana that no other city can bring forth, while others are starry-eyed, dazed, fascinated tourists overwhelmed with the palpable energy all around and rushing to capture it all on their huge DSLR cameras. The large mashals (torches) burning at the evening Aarti also illuminate the mind and soul, while the clangour of the singing and chanting, have a strangely calming effect and edify the senses, transporting you to a higher level of consciousness. The nurturing ground for Buddhism as well as one of the seven sacrosanct Hindu cities, which can bestow salvation, Varanasi is as pure and virtuous as the ‘Charnamrita’ (Holy water; literally, nectar begot from God’s feet) served in its temples.

How to Reach: Varanasi is easily accessible; by road, both government-run and private buses ply to Varanasi. By rail, Varanasi Railway Station is connected to other major Indian cities. Varanasi also has an airport and one can conveniently fly from Delhi, Mumbai, or any metro city to Varanasi.

Best Time to Visit: November- March marks the winter season in Varanasi, and the climate if perfect for a visit during this time of the year.

With a city as vivacious and diverse as Varanasi, there isn’t a cap on the amazing things one can experience and witness, but hopefully, this bucket list with top 10 places to visit in Varanasi will help you absorb the most of this wonderland that is Kashi: 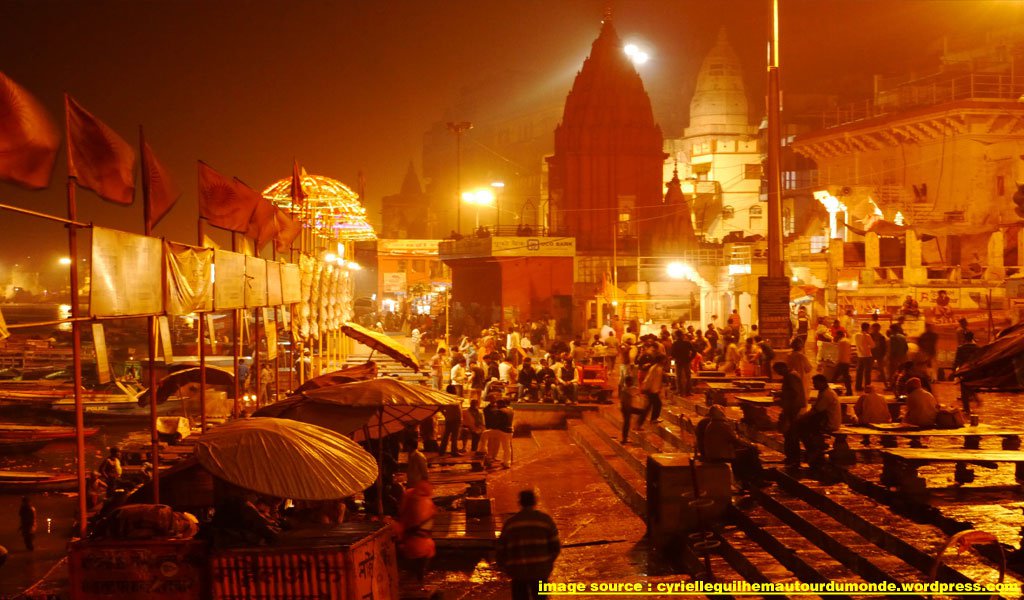 This is the most popular, and principal Ghat on the fringe of the mighty Ganges. The busiest Ghat yet the most spiritual one, this area wakes up with a start as early as 5 am and remains bustling with life until a little after 8 pm, when the evening Aarti reaches its finale. It is advisable to start your morning by taking a boat ride on the serene, marigold and rose-scented waters of the Ganges. According to Hindu mythology, Dashaswamedh Ghat was created by Lord Brahma for Lord Shiva; the Yagna held here saw the sacrifice (medh) of 10 (das) horses (ashwa). This Ghat is easily accessible as it is one of central places and there’s no pass or ticket required for the highlight event, the evening Aarti. Some tourists also like to rent boats to watch the Aarti from, whose price ranges from Rs.50 – Rs. 100, depends completely on individual negotiation. Come twilight, and the Ghat cannot be passed unnoticed as colourful umbrellas shelter the area and Pandits get ready with enormous, multi-tiered brass oil lamps and various offerings. The five Pandits who orchestrate the Aarti start to blow conch shells to mark the beginning. With the amount of work and enthusiasm that is put into the Aarti, it is hard to imagine that the same rite of worship takes place every day. Devotional songs and chants submerge the senses, and flower offerings are made to the Ganga maiyya. As the electrifying Aarti ends, the entire crowd of pilgrims and tourists, along with the Pandits set afloat tiny lamps fitted in leaf boats on the river, praying and asking for blessings.

The focal point of all the worship and devotion in Kashi is this famous Shiva temple, located on the Western banks of Ganga. It is believed that Shiva’s blazing pillar of light (Jyotirlinga) charged through the earth and that is where the temple was built. There are only 12 others of its kind and it even finds considerable mention in ancient religious texts. The darshan of Kashi Vishwanath is said to provide benefits equivalent to those begot from the darshan of other temples, including the other Jyotirlingas, scattered in India. The “linga” is a relatively small stone structure placed at the centre of every Shiva temple, is present here as well put up on a silver pedestal and depicts the endless power of Lord Shiva. Another valuable aspect is that the temple harbours three domes constituted of pure Gold. Even though the temple experiences crowds of almost 3000 every day, it reaches a new level during the time of Mahashivaratri, when there is a rush of devotees. A pilgrimage to the Kashi Vishwanath and a dip in the Holy Ganges is said to lead one to moksha or liberation. The 5 main aartis that are conducted every day are:

One of the oldest and most significant Ghats of Kashi, Manikarna Ghat is the one specified for cremation and deposition of the ashes. It is believed in Hindu mythology, that one of Lord Shiva’s ornaments fell on the earth while he was doing his Tandava (anger dance), which led to the formation of the Manikarna (literally, earring) Ghat. This Ghat is also revered greatly and is of much importance because it is said that when Lord Vishnu built a well, which is known as Manikarna Kund, for the bath of Lord Shiva and his consort Parvati. The Manikarna Ghat is considered to be immensely sacred and pure, and the ones cremated here are said to achieve moksha.

Famous as the area where the expat community resides, Assi Ghat, is home to many international students and tourists. It is the Southern-most Ghat in Kashi, has a vast expanse and can hold up to 22,000 people during festivals. A beautiful, wide open space with a very peaceful, recreational aura, many people can also be seen meditating or praying in silence here. Assi Ghat is a quiet and peaceful hermitage, away from the city’s bustle and is a great spot to watch the sunset over the Ganges.

This mosque is the Jama Masjid of Varanasi, centrally located. Its construction was ordained by Mughal Emperor Aurangzeb, in 1664. The original Kashi “golden temple” used to be situated at this site, but it was demolished by Aurangzeb and the Gyanvapi Masjid was built and erected in its place, in a bid by the Mughals to propagate Islam. The mosque derives its name from the Gyan Vapi (well of knowledge), located in the premises of the mosque. It is a popular tourist spot and is representative of Indian secularism.

Located 13 km away from Varanasi, the Dhamek Stupa, built in 500 A.D. is an important reminder of the beginning and prevalence of Buddhism in this area. Taxis and even auto-rickshaws are readily available from Varanasi to Sarnath. Stupas are Buddhist burial mounds, where ascetics were positioned and buried. The Dhamek Stupa stands on the park where the first Buddhist sermon (called Dhammacakkappavattana Sutta) was delivered by Gautam Buddha after attaining Enlightenment. The walls of the Stupa are inscribed with writings in Brahmi script, and exquisite carvings of the human figure, animals, birds, and flowers. Standing 43.6 meters tall, and still in great shape, the Dhamek Stupa is a remarkable symbol of the rich cultural heritage of India.

A picturesque structure standing on the eastern bank of Ganga, Ramnagar fort is very popular with tourists. It is located 14 km away and is easy to reach by boat. It also houses the maharaja’s private area, the Ved-Vyasa Mandir and the Saraswati Bhavan museum, which displays different kinds of memorabilia that makes one nostalgic about an era gone by. A line of vintage cars, swords, guns, daggers, matchlocks along with chillum-hookahs and musical instruments are on show here. Heavily decorated, and exquisitely ornate princely costumes, caches of precious jewellery, magnificently luxurious royal palanquins, and a wealth of books and manuscripts are also displayed. The fort is specially decorated and lighted on festivals such as Ram-Lila, during which the Ramayana is enacted, and Raj Mangal, marked by singing and dancing.

Maintained by the Archaeological Survey of India, Chaukhandi Stupa was built between the 4th and the 6th centuries A.D., during the Gupta period. The additional tower atop the Stupa was built in the 16th century, in honour of Emperor Humayun. It is a visually capturing structure and marks the point where Buddha and his disciples met on their journey to Sarnath from Bodh Gaya.

Once again showcasing the cultural and religious diversity of India, the St. Mary’s Church (est. 1946) is an architectural allure, with intricately patterned windows, a beautiful extended portico and louvered doors.

Situated near the confluence of Gomati and Ganga, Sarnath is the one of the four centres of Buddhist pilgrimage. The main tourist attractions here are the Ashoka Pillar, which was erected by emperor Ashoka, and the Sarnath Archaeological Museum which stores the Lion Capital of Ashoka (which was broken from its base) and the celebrated statue Dharmachakra Buddha. The Bodhi Tree, which was cut down, was reproduced from its base and stands tall. Living up to its prestige as a Buddhist town, Sarnath embodies the Buddhist values of peace and wisdom.

To visit Varanasi, you can visit the link http://www.waytoindia.com/golden-triangle-with-varanasi and send a query, and we would design the best customized tour to Varanasi.