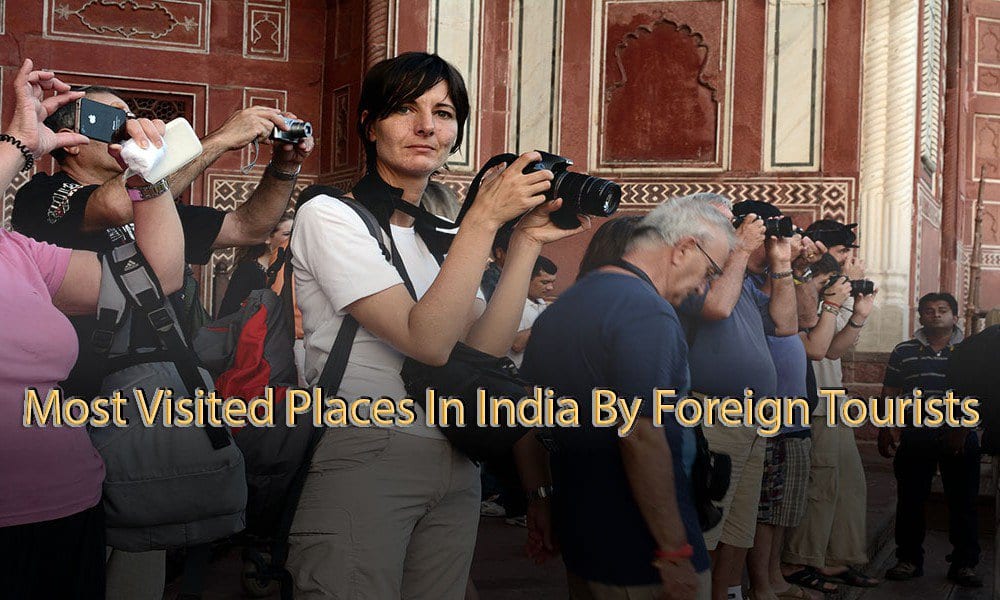 India is a complete package offering tourists from across the world the greatest opportunities of nature sightseeing, adventure holidays, honeymoon vacations, pilgrimage tours, cultural and festival expeditions and a lot more. Summarising the growing influx of inbound holidaymakers to the country, here are the most visited places in india by foreign tourists nationals that also provide the picture how diverse this fantasyland is.

Most Visited Places In India By Foreign Tourists

It might not be the royal capital of the dominant Vijayanagara Empire anymore, but Hampi refuses to give up on its magnificent past. And it succeeds, as history-buffs form a beeline to the bounder-strewn landscape which safeguards some of the greatest architectural specimen and ruins of once prosperous empire. The World Heritage Site of Hampi’s temples, royal enclosures, elephant stables and more is indeed a treat for eyes.It is certainly one of the most visited places in india by foreign tourists, which must be on your India travel plan.

Sky-touching temple towers of the world-famous Meenakshi Amman Temple in the temple city of Madurai exemplify the highest degrees of artistic brilliance. This astounding city in Tamil Nadu is also home to other architectural marvels like Thirumalai Nayak Palace and Koodal Alagar Temple. No wonder it catches the fancy of architecture-admirers from all over.Since it is one of the most visited places in india by tourists, we suggest that you keep Madurai on your travel itinerary if you are planning a visit to South India.

Called the ‘Venice of the East’ for good reasons , Alleppey hosts criss-cross backwater channels amidst lavishly green paddy fields and heart-warming countryside. Whether you are a nature-lover, a romantic couple or simply seeking revival, it can be your safest bet. Tranquil beaches and houseboat-dotted waterfalls on one hand and dramatic temple festivals and trophy races on the other – you will crave to visit again and again.If you are planning a visit to South India, Alleppey has to be on your India tour itinerary.

A multi-coloured carpet hand-woven by nature itself is what this pristine valley in Uttarakhand dons. Marigolds, orchids, daisies, poppies, rhododendrons, primulas and many other alpine and sub-alpine flowers blossom here to confirm our belief that heavens do exist. And as you feel magnetised with the beauty around, the spell gets broken with the presence of a snow leopard or a Himalayan musk deer.Best time to visit is in July when the valley is on full bloom.If mountains excite you, this is the place to visit in India.

The erstwhile summer resort established by the British, Munnar witnesses the most alluring aspects of nature. Dense forest canopies carpet the mist-laden peaks while lush green tea estates decorate the scenic valleys. Arrays of waterfalls, lakes, vantage points and treasures of exotic flora and fauna make this tropical wonder a perfect site to enjoy solitude or for romance to bloom.

The medieval town of Orchha has been a silent spectator to the autonomous rule of Bundela Rajputs. On the bank of River, Betwa was built one of the majestic forts and it continues to defeat the signs of aging. Resplendent palaces and enthralling temples like Chaturbhuj and Ram Raja along with wonders like royal cenotaphs are simply awe-inspiring. Truly an outstanding historical corridor to walk across and is surely one of the most visited places in india by foreign tourists.

Does the home to Taj Mahal need introduction? The Mughals poured out their entire love for art and architecture in Agra, adorning it with architectural masterpieces like Agra Fort, Itmad-Ud-Daulah’s Tomb, Mughal gardens, the ghost city of Fatehpur Sikri and a lot more. Foreigners are bowled over discovering the handicraft bazaars and delicious snacks and sweets here.Agra perhaps leads the list of most visited places in india by foreign tourists.

For those who have less time at their disposal, they may book a Agra Overnight Tour and visit this heritage city of India in just 1 night and 2 days.

Don’t believe the disguised face of Bikaner as a desert town. Step inside and you will find a fascinating world of extravagant forts (Junagarh and Lalgarh), glorious palaces (Laxmi Niwas Palace) and ornate havelis and temples coming alive. The place that gave the world flavoursome bhujias and namkeens (fried snacks) and sweets is no less deserving to be a part of most visited places in india by foreign tourists.

India’s national capital has been the seat of power for centuries and has witnessed the rise and downfall of the strongest dynasties ever. Swinging between Old and New Delhi, the city is a complete entertainer with sites like Red Fort, Qutub Minar, Humayun’s Tomb, India Gate, Lotus Temple, Jama Masjid and much more to its credit. It is multifaceted, celebrating every festival with the greatest enthusiasm and presenting mini-India at one fell swoop.

No list of tourist places in India for foreign travellers is complete without mentioning the country’s party capital Goa. The beaches here meet the international standards and what make them even more attractive are the thrilling water sports, the eternal colonial forts and dynamic night beach parties and seafood venues. The tiniest state of India is also home to popular cathedrals, wildlife reserves and a general carnival-like spirit.Other thing which makes Goa one amongst the most visited places in india by foreign tourists are the flea markets and saturday night markets.

Painted in pink, this royal capital of Rajasthan can be easily dubbed the cultural kaleidoscope of India. Hill forts like Amber, extraordinary spectacles like honeycomb-resembling Hawa Mahal and an array of exquisite temples, palaces and monuments add to its reputation as a celebrated tourist hub. It is here that foreigners have rendezvous with the finest culinary delights and spectacular handicrafts from clothes and jewellery to what not.

In the list of top destinations in India for foreign visitors, Jaisalmer is an obvious entrant. The Golden City probably has the world’s most unusual living fort which changes colours with sun’s movement. In addition to the remarkable places, Jain temples and Havelis (mansions), the fort is home to thousands of inhabitants as well as bazaars and restaurants. Lakes and museums take up the remaining historical landscape.

It’s not that ‘The Dark Knight Rises’ helped Jodhpur hog limelight. The city has always been on the radar of global tourists for being such a magnificent showcase of Rajasthan’s invigorating culture. The colossal Mehrangarh Fort lets one admire the royal heritage as well as the breathtaking views of the city painted in blue. Jaswant Thada, Mandore Garden and Umaid Bhawan Palace are the other testimonies to city’s entertaining spirit.

A fitting reply to Valley of Flowers in the north, Kaas Plateau in the West Indian state of Maharashtra is one of the best ideas for colourful vacations India. It bears over 850 different species of flowers during and after the monsoons, imitating a huge canvas painted in spectacular colours. The fact that it is now a no-vehicle zone adds to its exquisiteness quotient.

Kerala’s famous beach resort Kovalam shot to fame in the 1970s when flocks of hippies would amass here to holiday. Since then, it has been a famous gateway for the foreigners and has simultaneously gained prominence as the honeymoon destination. Silence dominates the crescent-shaped beaches and your senses are overpowered by the splendid sunset views and other stupendous sights.

The crystal clear salt-laden flatlands of Kutch Desert suddenly turn multi-coloured with the arrival of the annual 3-month long Rann Mahotsav. Beautiful tents mushroom up over the pure white sheet and the culturally-inclined people of Kutch assemble to showcase their heart-warming arts, dances and handicrafts.

An amalgamation of distinct contemporary architectures such as Gothic and Art Deco, Mumbai is one of the world’s hottest metropolises. It might not have a long history, but definitely a lengthy trail of heritage, along with lively beaches, larger-than-life festivities and a happening nightlife. Top attractions include Victoria Terminus, Prince of Wales Museum, Gateway of India and arrays of religious sites.Mumbai surely is one amongst the most visited places in india by foreign tourists.

The royal template of Mysore is very much in existence even after centuries have passed by. Be it the World Heritage-listed Mysore Palace, the hilltop guardian temple of Goddess Chamundehswari or the sprawling canvas of Brindavan Gardens, there is a sense of overwhelming resplendence all around. Mansions, churches, art galleries and museums make it count among famous places India welcomes foreigners to.

When petals from Lord Brahma’s holy lotus fell on the ground, the divine Pushkar Lake was born. Breathing at its periphery is a pilgrimage town in the heart of Thar Desert and guarded by Aravalli Hills. The annual Pushkar Camel Fair (November) witnesses foreigners thronging the place at par with domestic tourists. No wonder that they leave dumbstruck after being a part of the larger-than-life celebrations.

The colourful India tours take one to West Bengal’s highest peak Sandakphu. Comes spring and the entire region is blessed with rhododendrons and primulas that create the fascinating contrast with lush green foliage and snow-capped Himalayas in the backdrop. A trekking adventure is a must to explore this exotic profile of nature from close.

Confirming Kashmir Valley as the only paradise on earth, Srinagar unfolds like a special abode of Mother Nature. While soaring snow-laden peaks form an arresting backdrop, the marvellous lakes and elegantly laid Mughal Gardens adorn every inch of the hill station. Along with Srinagar, visit Gulmarg (for exhilarating Gondola ride) and Sonmarg to extend the mind-blowing experience.

Bengal tigers fascinate every soul on the planet and Thekkady, being a Tiger Reserve, is the perfect venue to explore the lord of the jungle. It is home to Periyar National Park which is established around Lake Periyar and is home to tigers, lion-tailed macaque, Malabar giant squirrel and several other denizens. The place is a spice paradise and has its air saturated with magical aromas.

India’s befitting reply to the most romantic cities in the world; Udaipur is like a fairy-tale world that has descended on earth. There are ruggedly handsome Aravalli Hills that host monsoon palaces and other monuments. And then there are incredibly beautiful lakes with striking palaces at shores and on islands. Exploring City Palace, Bagore-ki-Haveli, Ahar Museum and Saheliyon-ki-Bari is nothing short of a treasure hunt for the visitors.

Hindus call Varanasi their holiest city and the claim is absolutely relevant. River Ganges (Ganga) washes the feet of this favourite abode of Lord Shiva and adds to its mysticism. The concrete platforms (ghats) at the shores bustle with religious rituals and practices while the ancient temples like Kashi Vishwanath summon ardent believers in God. By all means, this melting pot of diverse cultures deserves to be among the most visited places in India by foreign tourists.

Some of the tours that we suggest for the tourists visiting India are :

http://www.waytoindia.com/golden-triangle-tour-with-varanasi (takes you to a heritage tour of Delhi, Agra, Jaipur and Varanasi)

http://waytoindia.com/golden-triangle-tour-with-udaipur (makes you experience the heritage cities of Delhi , Agra, Jaipur along with Udaipur, the city of Lakes)

For more suggestions and assistance on planning a tour to India, you may write to us.

A fascinating list, isn’t it? Don’t let that encouragement die and grab the opportunity to tick-off these wonderful places from your travel bucket list.After if these destinations are a part of the list of most visited places in India by foreign tourists ,there must be some good reason behind it.