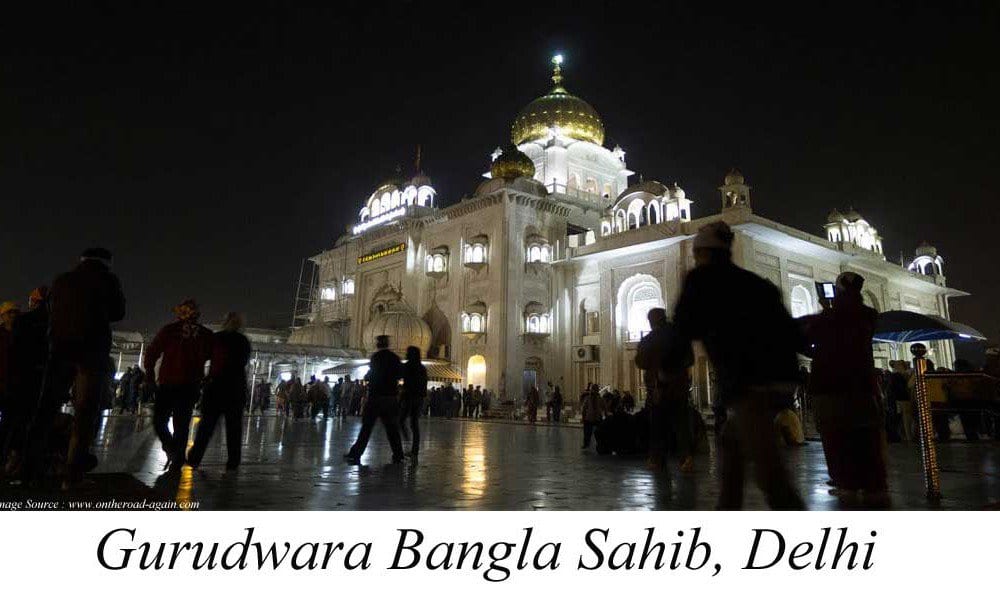 Bangla Sahib Gurudwara is an idyllic consummation of rich Sikh values and traditions, with an inspiration for brotherhood, spirituality and a better future. Experience divine bliss and religious revival a tone of one of the most prominent Sikh Gurudwara, Bangla Sahib Gurudwara in New Delhi. The religious epicentre attracts devotees from around the globe to experience tranquillity and closure to a contented lifestyle. The Gurudwara Bangla Sahib was originally a lavish bungalow of Raja Jai Singh, and was named as Jaisinghpura Palace. Later on, Bangla Sahib Gurudwara came into existence in the year 1783 as a representation of benignant of the eighth Sikh guru, Guru Harkrishan Sahib Ji who served the poor and downtrodden during en epidemic in the year 1664. The Gurudwara Bangla Sahib is established in honor of Guru Harkrishan Sahib.

The mesmerizing beauty of the Gurudwara Bangla Sahib, nestled along a glimmering pond, is a spectacle to behold. It is exquisitely adorned with an imposing golden dome and flagpole representing the symbol of Sikh religion. Superb marble floor leads the way to breathtaking prayer hall. The quintessential Sikh ritual of langar is dedicatedly pursued in the Gurudwara Bangla Sahib, serving food to around 10,000 people everyday and irrespective of caste, creed, religion, and sex. The massive langar hall is situated within the premises. It also has a higher secondary school, hospital and library, offering dedicated services to one and all.

Sri Guru Hari Krishan Sahib, a young boy, was the 8th prophet of the Sikhs who guided the community with immense wisdom and diplomacy. He was the second son of Guru Hari Ram Rai, the 7th Sikh guru, who disowned his elder son, Ram Rai, because he was more focused on pleasing the Mughal Emperor Aurangzeb by demonstrating magical miracles. After the death of Guru Hari Ram Rai, Emperor Aurangzeb, with the advice of Ram Rai, summoned Guru Hari Krishan Sahib to show occult miracles in Mughal court. However, Guruji vowed not to meet Emperor Aurangzeb to demonstrate such acts. On his visit to Delhi, Raja Jai Singh welcomed him as a royal guest in his haveli, the present Gurudwara Bangla Sahib.

During this time, epidemic broke out in Delhi and Guru Har Kishan Sahib moved among the poor and downtrodden to help those who were suffering. Every day, he used to distribute holy water to the ailing and sick, which has miraculous effect on their body, mind and soul. The Hindus and Muslims of Delhi were moved by Guruji’s compassion. After the death of Guru Har Kishan Sahib, Raja Jai Singh dedicated his haveli to the sacred memory of Guruji and his compassion for the sick and poor. Since then, it is being known as Gurudwara Bangla Sahib and has been an important place of worship for the Sikhs and all.

Gurudwara Bangla Sahib Langar Timings
Bangla Sahib Gurudwara serves delicious langar lunch to around 10,000 visitors everyday. Langar lunch is generally served from 9:00 am onwards. The experience of savoring delicious langar food in the land of God, with devotional trance music in the background, is certainly a memory that one will cherish forever. The langar serves chapattis, daal, subzi, and kheer at a sit-down meal held in regular intervals.

Things to Do in Bangal Sahib Gurudwara
Offer your praying to the Almighty and take Karah Prasad as the blessings of the God. Have a heart-filled lunch at the langar. Listen to the devotional songs inside the Gurudwara Bangla Sahib that will take you into trance. If you have time, sit and relax along the Sarovar, the beautiful pond within the Gurudwara Bangla Sahib premises. Watch goldfishes playing in the Sarovar. Simply get soaked in sheer spirituality and religious bliss exuded in the air.

Other luxury and budget hotels near the Gurudwara Bangla Sahib are:

Waytoindia.com has recently started taking bookings for Hemkund Sahib Yatra By Helicopter. These tours start from Delhi and involve flying in helicopter from Dehradun to Ghangaria and back. The tours include all assistance such as porters, pony, boarding and lodging etc.

Waytoindia.com is also now taking bookings on per person basis for Hemkund Sahib Yatra by bus from Delhi. This tour is a luxury tour with the bus being a Luxury Isuzu bus that has a washroom also.