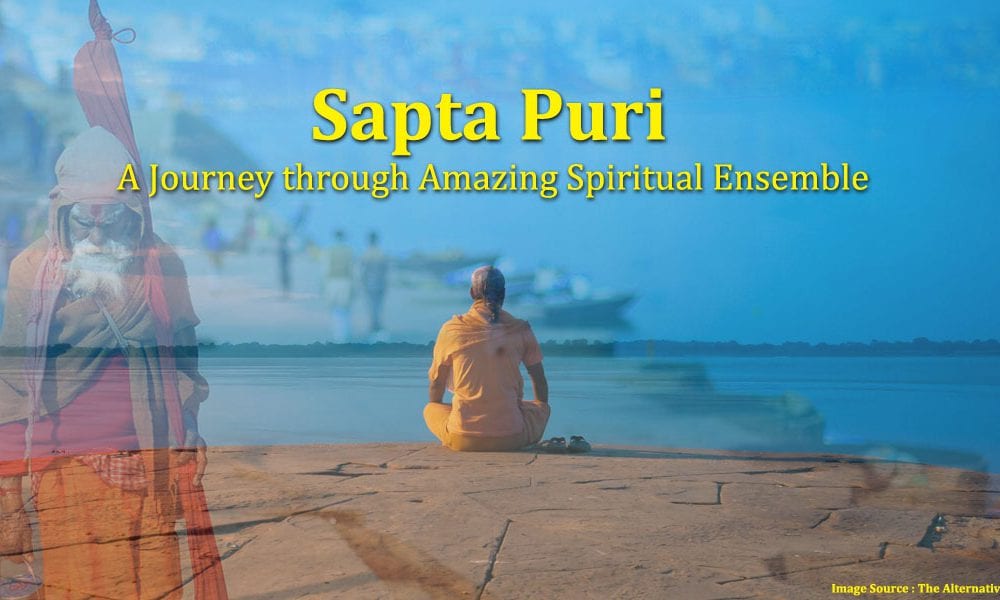 Are you looking forward to an amazing spiritual journey in India? Visit Sapta Puri. This tour takes you through the divine magnetism of India’s seven holy cities, namely, Ayodhya, Mathura, Dwarka, Haridwar, Varanasi, Kanchipuram, and Ujjain.

Sapta Puri covers seven pilgrimage sites having a rich history and spiritual powers. According to Holy Scriptures, God has descended these cities in different incarnations.

A common belief is that if one visits all the seven pilgrimage centers, one will attain salvation of Moksha.

WaytoIndia presents a comprehensive guide to Sapta Puri that will make your journey unforgettable and worthy.

Ayodhya is the birthplace of Lord Rama and is one of the holiest pilgrimages in India. It is situated on the banks of Sarayu River in Uttar Pradesh.

The city highlights rich history and cultural heritage that dates back to thousands of years. It is one among the Sapta Puri sites.

Mathura, the second among the Sapta Puri sites,  is located on the banks of River Yamuna in Uttar Pradesh. It is the birthplace of Lord Krishna and is one of the ancient pilgrimages in India.

Waytoindia.com organises Agra Mathura Vrindavan Tour from Delhi for its valued guests. You may write to us on info@waytoindia.com to book this tour.

Sapta Puri Tour also covers Dwarka, one of the seven holy cities in India. It is located on the banks of Gomti River in Gujarat. The pilgrimage site holds importance as Lord Krishna lived a major part of his life there.

Book your Dwarka Somnath Tour with us and visit one of the Char Dham of India along with two Jyotirlingas.

It is the holiest pilgrimage site in Uttarakhand and the “gateway to Lord Vishnu.” The city beholds rich history and spiritual aura that makes it a must-visit on Sapta Puri Tour.

The world-famous Kumbh Mela is held here every twelve years when millions of devotees flock around this pilgrimage center.

It is the oldest city in India, located on the banks of River Ganges in Uttar Pradesh. It is the abode of Lord Shiva, where devotees pay a visit to seek His divine blessings.

The common belief is that one who dies in Varanasi will attain liberation. The history of the city dates back to more than 5000 years.

Kanchipuram is one of the seven sacred cities of India, situated on the banks of River Vegavathy in Tamil Nadu. The city has a rich history and cultural heritage that attracts tourists from around the world.

Sapta Puri Tour also covers the ancient city of Ujjain, earlier known as Avantika. The sacred pilgrimage site dates back to 3rd century B.C. and is the abode of Lord Shiva.

It was also the hub of India’s astronomical research in ancient days. It is one of the four holy sites that host the famous Kumbh Mela.

November to March is the best time to visit Sapta Puri. This is the season of countless fairs and festivals that bring out India’s rich spiritual traditions.

You may book your Sapta Puri Yatra by calling us on 8527255991 or writing back to us on info@waytoindia.com.

Liked this blog? Also read our blog on the famous Gangasagar Mela to visit a pilgrimage to Gangasagar.