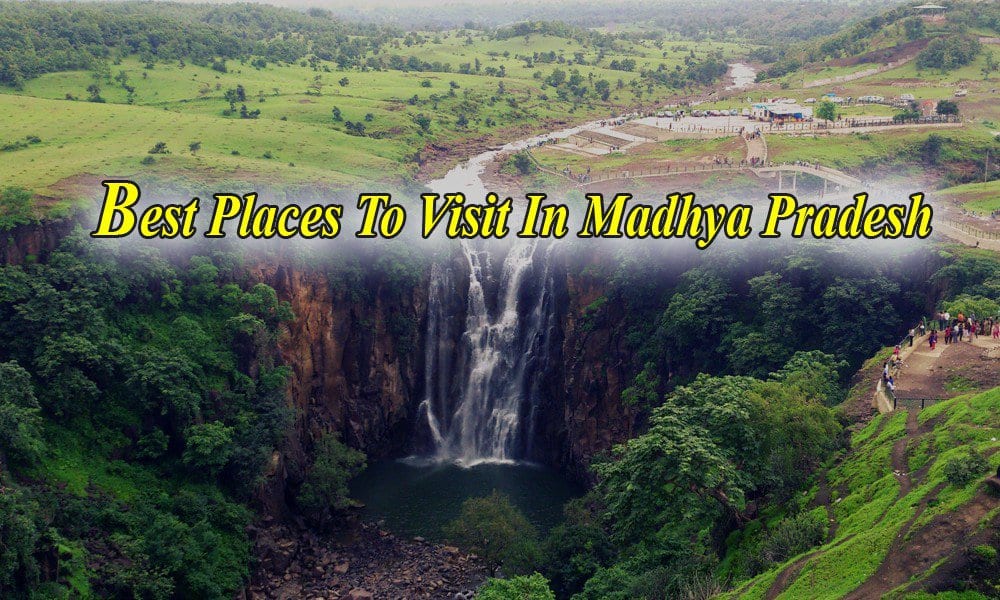 Incredible India – the term aptly describes the State of Madhya Pradesh too. We explore in this blog the places to visit in Madhya Pradesh,  located in the heart of India, where cultural boundaries blur to accommodate a delightful concoction of different religions.Wherein, the Hindu, Muslim and Buddhist people live amidst peace and harmony.

Places To Visit In Madhya Pradesh

From the tourist’s point of view, let us check out the best places to visit in Madhya Pradesh and their Salient points: 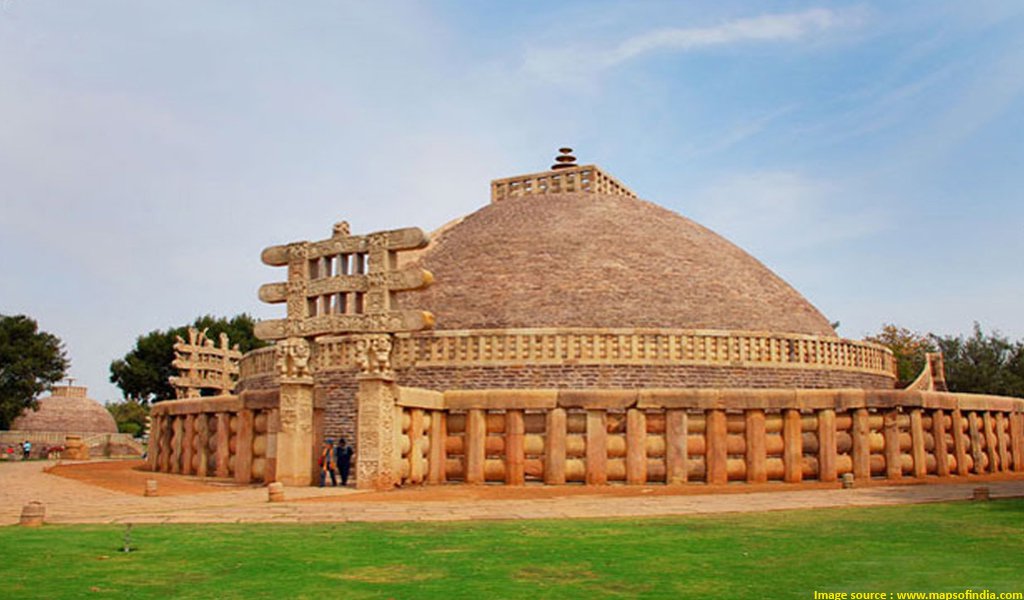 The grand Sanchi monument is counted as one of the popular UNESCO World Heritage Sites from India and is thus one of the most important places to visit in Madhya Pradesh. This stupendous structure is located near Bhopal city of Madhya Pradesh State. Erected by Emperor Ashoka in the third century BC, it is renowned for its monolithic pillar, beautiful temples, stupas and artistic grandeur. The ancient structure in Sanchi also known as the ‘Great Stupa’, which was constructed using special kind of hemispherical bricks adorned with a Chatra crown on top.

Built during the reign of Chandela Dynasty Kings (950- 1050 AD), out of the 85 majestic Khajuraho temples, only 20 remain today.  A Khajuraho tour of the temples reveals illustrious imaginative exquisiteness; they were constructed in a unique way amid mesmerising architecture, giant Shikaras and stone carvings.

These Monuments are an amalgamation of Jain as well as Hindu temples subdivided into three complexes – Southern, Western and Eastern. The Kandariya Mahadev temple is primarily a Shiva Shrine with numerous artistic carvings depicting several Hindu Gods, Goddess and others in various poses.

One of the supreme wildlife spots in the Indian subcontinent, the exhaustive Kanha Tiger Reserve is spread over 232279 acres of wilderness. The park is located in the Maikal range covering the Mandla and Balaghat areas of Madhya Pradesh State.

Kanha Reserve has earned its name as one of the best tourist places in Madhya Pradesh comprising of dense bamboo forests, emerald meadows and deep gorges; home to the wild feral animal species.It is surely one of the places to visit in Madhya Pradesh that you must visit.

The historic city of Gwalior in Madhya Pradesh is an important tourist destination with medieval forts, palaces, dam and temples. Standing tall and proud over a massive heap of sandstone, the great Gwalior Fort is the brightest jewel for Gwalior tourism. The Gwalior Fort takes visitors back in time, where battles were fought and heart-wrenching Jauhars of the self-respecting Rajput clans.

There are total six palaces, three holy shrines and water tanks housed within the walls of the gigantic fortress.

Man Singh Palace is one of the grand palaces with the complex, built during the late 14 century, it depicts olden Hindu architecture with large open courtyards and artistically designed apartments.

Orchha village lies near the Betwa Riverbank in the State of Madhya Pradesh, founded in the year 1501.  This medieval village is rich in primaeval culture; the ancient temples and palaces are proof to its past grandeur.

Orchha was the capital of Rajput Bundela in the 16th century period and Raja Mahal is one of the oldest palaces in it. Orchha is a very picturesque place, where visitors can observe an amazing mixture of man-made architectural wonders coupled with natural floral beauty. This makes it one of the places to visit in Madhya Pradesh that should be on any traveller’s list.

The laid back and relatively stress-free lifestyle of the locals induce tourists to stop at this remarkable village and enjoy a historic tour of the place.

Discover India’s glorious past at heritage structures, catch a glimpse of spirituality at ancient temples or get adventurous on a wildlife exploration; a tour of Madhya Pradesh is unavoidable for global and Indian tourists, who desire to capture the real essence of central India.

Tourists can map out a suitable itinerary to all the major places in Madhya Pradesh such as wildlife sanctuary tour, Heritage temple pilgrimage or Gwalior, Orchha, Khajuraho city tour.

Located in the Dhar district of Madhya Pradesh, Mandu is best visited in Monsoons, when the lush green hillocks and the exquisite historical monuments reverberate with Cuckoo sounds.One of the not to be missed places to visit in Madhya Pradesh, Mandu is a photographer’s paradise in the monsoons when one can capture the reflections of Jahaz Mahal and other archaeological sites in their cameras.

How to reach Mandu- the nearest airport is at Indore which is about 85 Kms.Nearest railway stations are Indore & Ratlam which are connected to Mandu from all major metros in India.Road connectivity between Indore and Mandu is also good.

Best Place to stay – Malwa Resort, a property of MPTDC is one of the good places to stay.There are several options including tents out of which one can choose from.

For those who are not aware of what a Jyotirlinga is,  a Jyotirlinga or Jyotirlingam (Sanskrit: ज्योतिर्लिङ्ग), (Devanagari: ज्योतिर्लिंग) is a devotional object which is a physical representation of the Supreme God Shiva.God Shiva is one of the 3 Gods of the Trinity as per Hindu religion.

Ujjain shall also be hosting the Kumbh Mela in 2016, so for those of you who are interested in witnessing this great event, book your tickets now.You may also write to Waytoindia.com or info@waytoindia.com to book your package for Kumbh Mela at Ujjain.

How to reach Omkareshwar: You can take a flight to Indore which is the nearest airport or even a train to Indore from most of the metro cities.Further, from there you can either take a taxi or you can go to Sarwate bus stand from where there is an hourly bus that charges about Rs 80/- up to Omkareshwar.However, please note that the bus service between Indore & Omkareshwar is only between 6 am to 12:30 pm.

How to reach Mahakaleshwar: You can take a flight to Indore which is the nearest airport or even a train to Ujjain from most of the metro cities.Further, from there you can either take a taxi.

For those who need any assistance in visiting Omkareshwar and Mahakaleshwar, kindly note that Waytoindia.com organises 12 Jyotirlinga Tour Package each year.To enrol for these tours, you may write to info@waytoindia.com or call on 8527255995.

40 Kms from Bhopal are the Bhimbetka Rock Shelters which depict the palaeolithic art.The caves men of the palaeolithic age had made awesome paintings that depict the everyday life of these cave dwellers.Bhimbetka is also one among the places to visit in Madhya Pradesh that are not to be missed.

How to reach Bhimbetka: Bhimbetka is in the Raisen district of Madhya Pradesh and is about 45 Kms from the state capital Bhopal.You can reach Bhopal by air or by train from where a local taxi can be hired for visiting Bhimbetka caves.

While driving back from Bhimbetka to Bhopal, ask your driver to take you to Bhojeshwar Temple which houses a 7.5 feet tall Shiva Lingam.

Famously known as Satpura ki Rani or Queen of Satpura, Pachmarhi is a hill station in the state of Madhya Pradesh in India.It has been an army cantonment since the days of British Raj in India.It is believed as per the Hindu mythology that Pachmarhi was discovered by Panch or five Pandavas of the Mahabharata fame.Today Pachmarhi is a famous tourist destination where tourists from across India and also abroad visit every year.

Waytoindia.com also organises trips & packages for families and groups for Pachmarhi.For booking a trip, you may write on info@waytoindia.com.

One of the tours that we would like to suggest to guests who wish to visit India is Golden Triangle with Khajuraho Tour. To read more about the tourist places in Madhya Pradesh, you may read our blog on the link https://travel-blog.waytoindia.com/tourist-places-in-madhya-pradesh.